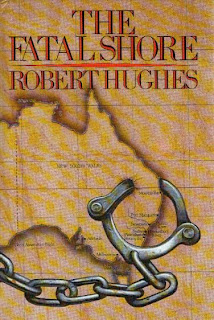 Title: The Fatal Shore: The Epic of Australia's Founding

Amazon.com
An extraordinary volume--even a masterpiece--about the early history of Australia that reads like the finest of novels. Hughes captures everything in this complex tableau with narrative finesse that drives the reader ever-deeper into specific facts and greater understanding. He presents compassionate understanding of the plights of colonists--both freemen and convicts--and the Aboriginal peoples they displaced. One of the very best works of history I have ever read.

Well, after my recent trip to New Zealand and Australia, I thought that I should do some reading on the antipodes, so of course I decided to pick one of the biggest non-fiction books available. It's strange, isn't it, the books that can get you out of reading slumps? I always assume that it will be a light-hearted, funny book that will get me back into reading. But inevitably, it's some huge tome with a great many depressing scenes and themes.

This book certainly delivers depressing scenes and themes. Australia was settled as an English penal colony- obviously, there are many scars there, and a whole lot of brutality. Enough, in fact, to write a whole 600-page book. Plus appendices.

I was thoroughly engrossed in this book until about page 500. And then it just started to bog me down. Hughes spends a large portion of the book recounting how many times people were whipped. He even sets up a chart to show you the average number of whippings per person in Australia over a certain number of years. He describes the whip (called a cat o' nine tails) in minute detail. He describes the "art" of properly whipping someone. He talks about the lash marks people would get on their backs. I feel like I know more about whippings than I ever thought I would.

Granted, he has a reason to go on in such detail- whipping was (apparently) quite a normal part of life in colonial Australia. He also touches on the subjects of the Australian class system, its obsession with wiping out the "Stain" of being descended from a convict colony, sexism, sodomy, politics, bushrangers and racism.

It's all very interesting- but perhaps not read all at once, in so much detail. After a time, I just couldn't bring myself to read about the many ways that prisoners on Norfolk Island were tortured. Or about the horrible conditions that female convicts lived in. I think the most interesting part of the book was the section on the Australian bushrangers. I guess that's kind of obvious- really, who would not want to read about Ned Kelly's forebears? It was really interesting to read about how Hughes believes the Australian contempt for authority arose out of the bushranging, Robin Hood-like myth. Of course, it doesn't really eliminate the fact that bushrangers generally were criminals, but everyone likes a daredevil hero to remember and write songs about!

Most of the bushrangers, in case you were wondering, received several whippings. Which caused me to wonder- if you are sending a low-income criminal on a very long sea voyage to the other end of the world, without family or friends and a very low chance of ever returning... isn't that punishment enough? Do you really need to continue to whip and beat him for years afterward? It is so bizarre, really, to imagine the entire =thought= process of a colony being set up for punishment reasons. Seems a great deal of trouble to go through to get rid of criminals. But Hughes does explain that as well!

I think the most important- and certainly, the most disturbing- part of Hughes' book, however, was when he touched on the Australian relations with the Aborigines. To put it mildly, Australia does not have a very good track record in its treatment of the native population. Granted, most colonizing forces entering new lands do not treat native populations well. But sometimes, the treatment of the native Australians seems absolutely inhumane. The population was absolutely decimated- especially in Tasmania. For example, see this passage from the book (a long one- I apologize):

The last [Tasmanian native] man died in 1869. His name was William Lanne... Realizing that his remains might have some value as a scientific specimen, rival agents of the Royal College of Surgeons in London and the Royal Society in Tasmania fought over his bones. A Dr. William Crowther, representing the Royal College of Surgeons, sneaked into the morgue, beheaded Lanne's corpse, skinned the head, removed the skull and slipped another skull from a white cadaver into the black skin. This gruesome ruse was soon unmasked, for when a medical officer picked the head up, "the face turned round and at the back of the head the bones were sticking out." In pique, the officials decided not to let the Royal College of Surgeons get the whole skeleton; so they chopped off the feet and hands from Lanne's corpse and threw them away. The lopped, dishonored cadaver of the last tribesman was then officially buried, unofficially exhumed the next night and dissected for its skeleton by representatives of the Royal Society.... Lanne's skeleton then disappeared; and the head, which Crowther consigned by sea to the Royal College of Surgeons, vanished, too. It seems that the ineffable doctor had packaged it in a sealskin, and before long the bundle stank so badly that it was tossed overboard.

Another example in The Fatal Shore: Hughes states that Australians working on their farms would see Aborigines walking about and shoot them. Just like that- dead. As though they were some sort of pest. The way that you might shoot a fox coming after your sheep. Or the way I might squash a centipede with a broom. They didn't even stop to consider that they were committing murder, because they didn't even think of the Aborigines as human. So in their minds... they had done nothing wrong.

The Aborigines were not an "advanced" civilization. They wore no clothes, had no permanent shelters, and led a nomadic, hunter-gatherer existence. They did not bathe. So the English thought they were expendable. And when you're a penal colony, and you are already the lowest of the low on the social ladder, you REALLY need to believe that there is someone further down that ladder than you.

I have a great many thoughts on the Australian/Aborigine relationship, but if I learned anything in Australia, it is that discussing Aboriginal affairs is a hotbed of debate- and I certainly don't know enough to start spouting off my opinions. But it was enough to whet my interest, and I hope to learn more about the situation- at which time, I promise to make my views known.

Until then, though, I think I might need some lighter fare for reading, so I'm off to the Appalachian Trail with Bill Bryson!

Would I recommend the Hughes book? Yes- it's interesting. It presents so many facts, and really has so many improbable stories and entertaining characters in it. I got bogged down towards the end- which really, can easily happen with a book of that length. Not EVERY page was fascinating, but I do think I know much more about Australia's beginning history than I did before. Which was my aim in reading the book- so, goal met!
Musings by Aarti at 10:00 PM